The Veruca Salt Effect: I Want It Now! - My Mind My Body
ShareTweet 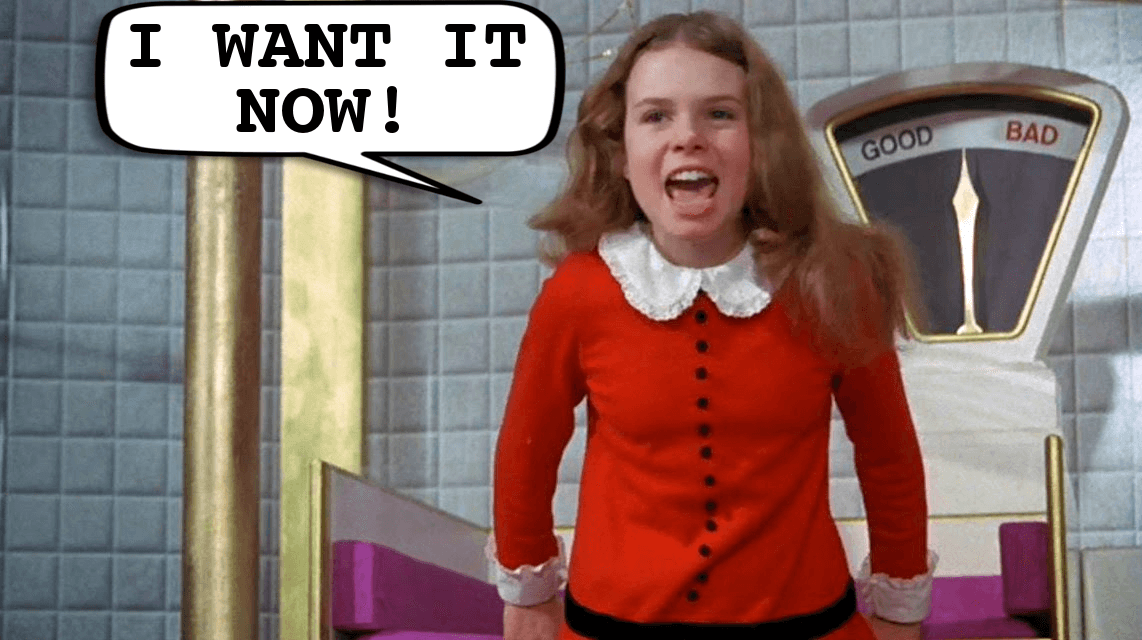 Have you seen Willy Wonka and the Chocolate Factory? I’m talking about the classic Gene Wilder version from 1971, not the Johnny Depp version. 1 One of my favorite characters is Veruca Salt. I love the part when, upon entering the section of the factory where the golden geese are laying their golden eggs, she has a bratty tirade and then bursts into song about how she must have a golden goose…NOW! 2 I won’t spoil the ending for you if you haven’t seen it, but it does not end well for my beloved Veruca.

I feel Veruca’s song mirrors the need for instant gratification that permeates our society. It’s pretty much status quo. Do you want to watch a movie? It’s available for instant download! Do you want to lose 10 pounds in two weeks? Try this diet!3 Do you want to know what’s going on in the world? Go on the internet! No need to wait until the next morning for the newspaper.

On the other hand, intuitive eating is a practice of patience and resiliency. You will not start intuitive eating and, within a few weeks, become an intuitive eater. You’re gonna have to baby step this sucker! If you think about it, when did dieting enter your life? How many years or decades ago did it weasel its way in? It’s likely that dieting has been in your life in some way for a LONG time. If that’s the case, why would you expect to undo years or decades of approaching food and your body one way and then completely flip your mindset within a few weeks?

For me, feeling bad about my body started around 2nd grade. I learned somewhere along the way that being thinner was “better”, so the idea that my body wasn’t ideal stuck with me. I began exercising a bit in middle school with the hopes of shedding a few pounds, but I didn’t actively diet until my mid-twenties when I heard a family member get compliments for losing weight. I thought to myself, “I have been exercising for years and I eat decently, so why am I not thinner?!” I was drawn into the Weight Watchers concept of eating what you want while losing weight, and that is when dieting’s final seduction occurred.

As I look back, I had been in the dieting mode in some form or another since I was about 7 years old. That meant that I had to overcome over two and a half decades of negative thoughts and feelings about food and my body. Though I was done with dieting and ready to dive into intuitive eating, it was was scary! It wasn’t like I was just breaking the habit of cracking my knuckles. The dieting world was a formidable opponent, and I knew that I needed to build some serious backbone in order to learn how to ignore the constant diet propaganda.

Most people who I’ve communicated with on the intuitive eating community forum say that doing one or two intuitive eating principles at a time helps them. Some people claim that they did intuitive eating 100% right off the bat, but I noticed that they usually had only short-term success and were very susceptible to jumping back on the dieting bandwagon. It would be like quitting smoking cold turkey. I’m sure there are some people out there who can attest to just quitting, but most need some kind of support on their way to giving up cigarettes. Intuitive eating is the same way. Taking it one principle at a time really allows the person to internalize the principle and make it their own. Once that happens, moving on to the next principle is an easier transition.

Which principle should be the first one to tackle though? I personally think that rejecting the diet mentality is a good place to start because I see it as the foundation of intuitive eating and it weaves throughout all of the other principles. If you are able to dump all of your dieting books and magazines, unbookmark your favorite fitness-for-weight-loss websites, and actually get angry at the dieting industry for being a puppeteer for so long, then tackling the other principles will likely be simple in comparison. However, you are a unique individual and you can choose whichever principle makes sense for you at this point in your life!

Although I didn’t start with rejecting the diet mentality, I wish I had.4 I was a restrictor, meaning I dieted by consuming as few calories as possible, hunger pangs be damned! With the encouragement of my dietitian, I worked on eating when I was actually hungry rather than waiting until the scheduled time to eat.5 This took a while because I fought with myself daily at first because I felt like I shouldn’t be hungry since it wasn’t time to eat. At work, lunch is at 12:13pm,6 so I had to wait until then. This was a food rule that I had because dieting is all about following the rules. It had gotten it into my head with Weight Watchers that I had to eat as little as I could which meant I should be putting as much distance as possible between the times that I ate. Thus, I made up the food rule of waiting until the designated times to eat.

As I reflect, this was guided by diet mentality. If had examined my place in the dieting world, I would have realized how entrenched I was and going after the diet mentality first would have made my intuitive eating journey a little easier. I finally got to the point where I could see how manipulated I was by the dieting industry and that pissed me off! That anger fueled me when intuitive eating felt like the hardest thing in the world. Rejecting the diet mentality was one of the most challenging principles, but, once I conquered it, the other principles fell into place more easily.

Intuitive eating is not a quick fix. It can seem impossible, like you’ve been told to climb up a mountain in a pair of flip flops. Intuitive eating can be so overwhelming the first time you read the book because, at first glance it may sound easy, but, once you actually start, you may find that all of the parts put together create a sense of anxiety.

One strategy that I have my counseling students implement is breaking apart big tasks into small chunks if they are feeling overwhelmed and anxious. This reduces their stress related to the pressure of a large task and they have bursts of success when each chunk is marked off of their to-do list. It’s win-win! Intuitive eating is the same way. You may have a desire give up within a few days or you may want instant results and channel your inner Veruca Salt and scream, “I want it now!”, but by breaking down intuitive eating into baby steps and focusing your mental energy on a principle or two at a time, you’ll likely be more successful.

What is your approach to intuitive eating? “I want it now!” or slow and steady? Please share in the comment section below!

1Yeah, I saw Charlie and the Chocolate Factory version with Johnny Depp when it came out in 2005. It was “meh” compared to the original.

2Want to see Veruca Salt belt out “I Want It Now”? That’s why we have YouTube!

3Never mind that it took you more than 2 weeks to put on those 10 pounds!

4The expression “hindsight is 20/20” exists for a reason, right?

5I wrote about this in “Who Says I Can’t Eat Dinner at 4pm?” if you want to check it out!

6I worked in the public school system, so the class periods always seem to start and end at funky times.

4 thoughts on “The Veruca Salt Effect: I Want It Now!”