Death Gave Me a Push - My Mind My Body
ShareTweet 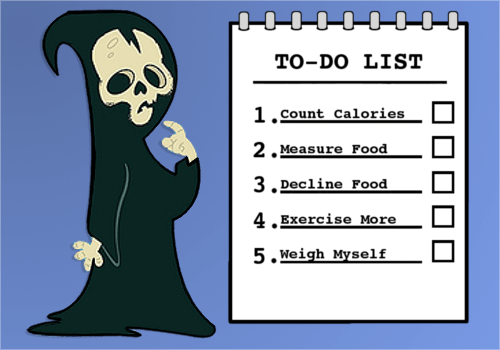 I must warn you that this entry delves into one of the most stressful and heartbreaking few months of my life, but despite this, I came out of this experience more ready than ever to tackle my eating disorder.

My father and I have always been close. When he and my mother separated after middle school, I chose to live with my father. Years before, when my mother was preparing me for the inevitable separation, she asked me who I wanted to live with. I said I wanted to live with her because children are supposed to want to live with their mother, right? When it came down to actually deciding, I realized that I didn’t really get along with my mother. It was just a personality thing. My father’s demeanor was better suited for me, so I chose to live with him. In my mid-twenties I married and moved to the neighboring town. Because I liked spending time with my father, I met him for lunch or dinner at least once a week. We were close.

My father caught bacterial pneumonia in March 2011 and died almost exactly a month later. During that month, I spent as much time as I could at the hospital with him. It was painful to see him so frail and helpless. Initially, there was a possibility that he would recover, but there was also the possibility that he would not. It was touch and go for a while until it became obvious that death was near. Emotions came in waves. I went from being hopeful to full of dread within minutes.1

The illness and subsequent death of my father really put my eating issues into perspective. Food and my weight just didn’t seem all that important anymore. When I thought about my father and his condition while in the hospital, I realized that a few pounds on the scale wasn’t a huge deal. My father was dying and my purpose in waking up was to spent time with him during those last few weeks because I would never get the chance to do that again. Who cares what the scale said? What did it matter how many calories were in an ounce of tortilla chips? I realized that my body was strong and had done everything I had ever asked of it. Eating a piece of pie wouldn’t kill me. Hell, eating two pieces of pie wouldn’t kill me. Compared to what he was going through, my issues seemed petty. “Petty” might seem a little harsh,2 but it was just hard to think of it any other way when life seemed so fragile. It was unfortunate that I didn’t come to this conclusion on my own without my father having to go through such an awful illness.

After my father’s death and memorial service, my eating disordered thoughts returned but in a muted way. They were present but not as intrusive which made them more manageable and much easier to dismiss. I finally felt like my obsession with food and my body was waning. I had this newfound perspective about what really was important in life. I learned that life is precious,3 but the sacrifice and loss that was needed for me to learn this was profound. Though I would give anything to have my father back, I am looking at life though a new lens and I have him to thank for it. Not only am I overcoming my eating disorder and body image issues, I am truly searching for what makes me happy and am making every effort to pursue that. I think my daddy would be proud.

1Regret never came up. I always spent quality time with my father, so for that I am grateful.

2I am not trying to marginalize anyone who is in the midst of an eating disorder, but this is how I felt during that time of my life.

3Cliché, I know, but that is why we have clichés.