Did I Just Refuse a Donut? - My Mind My Body
ShareTweet 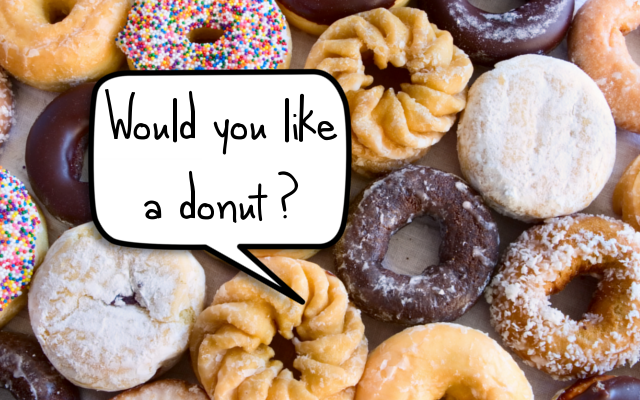 I have been in education for well over a decade, and one thing that I have noticed at every single school site I’ve been at is the amount of treats readily available. And this goes beyond the hooray-it’s-Friday treats. I could enter the teacher’s lounge area any day of the week and find something to eat the majority of the time. Because teachers have such a sweet tooth,1 it usually wasn’t a veggie platter. When I first started dieting, I made it a rule to avoid the teacher’s lounge at all costs, especially on Fridays.

Donuts are a staple in any teacher’s lounge because it is one of the easiest and yummiest treats to bring. For me, that familiar pink box had an intense gravitational pull to it.2 When I’d peek under the lid, I’d be mesmerized by the colors and shapes and the promise of an exquisite sugar high. My salivary glads kicked into gear as I asked myself which one should I choose? There were just too many options! The iced old fashioned or the maple bar? The one with white icing and rainbow sprinkles or the cinnamon twist? Maybe just a plain glazed would do or a few donut holes. The possibilities seemed endless as I scanned the rows of donuts.3 I’d anticipate the intoxicating sugar-fat-carb combo as I took that first bite and eagerly awaited the pleasure of each subsequent bite. When I began dieting, these decisions went from a minor nuisance to complete anguish. I would tell myself that I shouldn’t have a donut because it’s “bad” for me and that ruining my diet would make me fat. To avoid these uncomfortable thoughts and feelings, I simply avoided the teacher’s lounge.

When I decided to start intuitive eating and make peace with food, donuts were one of the foods that I had to face. During my dieting years, I did allow myself to eat donuts, but it came with a lot of baggage. I would allow myself only half of one or I would make sure to exercise more that day or I would skip my ½ cup of ice cream that night to make up for my sweet indiscretion. When it was time to unconditionally allow donuts back into my life, I had an interesting experience.

One of my first goals when making peace with food was to eat freely but to also make sure that I actually enjoyed what I was eating. “Discover the Satisfaction Factor” is one of the principles of IE and the authors encourage intuitive eaters to adopt the motto “If you don’t love it, don’t eat it, and if you love it, savor it.” That statement resonated with me, and I was determined to find satisfaction in my eating experiences!

A perfect opportunity arose when I had a taste for something sweet one lazy Saturday afternoon about a month into my intuitive eating journey. I ran though a mental list of sweet things I enjoy and the food that sounded good to me was a donut, and not just any donut, an old fashioned maple donut. Shortly thereafter I found myself looking through the display case at a local donut shop. I ordered and paid for my donut and drove back home.4 I settled myself down at my kitchen table and savored my first bite. The maple icing just melted in my mouth and the crunchy outer layer of the donut was a pleasant contrast to the soft, sweet center. I slowly took a second bite, but there was something different about the taste. I realized that the maple icing was too sweet for me! This would have never had occurred to me in the past because my eating experiences were often rushed and mindless. After getting over the initial shock of this realization, I grabbed a knife and scraped off some of the icing until the perfect amount remained. My search for a satisfying eating experience was successful despite that minor detour.

Though I now allow myself to eat donuts when I want, I occasionally turn them down. As I previously mentioned, schools have a constant supply of treats around, and the end of the most recent school year was no exception. An email was sent out to the staff stating that a parent had brought in a “Thank You” box of donuts for the staff. As I approached the box to choose my donut, I thought about my hunger. I had eaten breakfast only about an hour prior and I really wasn’t hungry. Because I had given myself permission to eat, I could still eat the donut if I chose to….but I chose not to. That afternoon, I mentioned this to my husband. He looked at me sideways and told me that he never turns down donuts and that donut-time is all-the-time. I explained to him that since I wasn’t hungry, the donut really wouldn’t taste all that great because I need a certain amount of hunger for food to be appealing. I could have eaten the donut to satisfy my taste hunger, but I would rather wait until I have actual physical hunger so I would get more pleasure out of the experience.

As I processed my turning-down-a-donut event, I wondered if this was a form of pseudo-dieting. This is the dieting that occurs when you say you’re not dieting, but you actually are in subtle ways like eating only “safe” foods. I put myself up to the challenge a few days later when an interesting opportunity presented itself. I had a half-day at work and figured I would go home, scramble an egg, and throw it in a flour tortilla for lunch.5 When I got home I realized that I didn’t really want to eat that “safe” meal and ended up eating a cinnamon raisin bagel and cream cheese since that was what my body was asking for. And it was so good! Sure, I could have eaten the burrito, but it wouldn’t have been the same. It would have tasted fine, but it wouldn’t have tasted great.

I have come to the conclusion that I’m not a psuedo-dieter. I will not only turn down free, delicious donuts, but I will also turn down any food that doesn’t appeal to me in pursuit of a better eating experience. Not every eating experience has to be spectacular, but why not shoot for that whenever I can, right?

Do you feel you are a psuedo-dieter? Please share your thoughts and experiences in the comment section below.

1Yes, this may be a generalization…but, for the most part, it’s true!

3Deciding whether or not I wanted a sugar donut was never a dilemma for me though. They just don’t do it for me!

4Atmosphere was important part of the eating experience for me. I could have eaten my donut at the donut shop, but I prefer the comfort of my own home where there would be fewer distractions.

5It has to be a flour tortilla! I don’t do whole wheat, low fat, or any other variation. It would be like substituting fat free Greek yogurt for sour cream on a baked potato. No, thank you!