Is My Vegetarianism a Form of Dieting? - My Mind My Body
ShareTweet 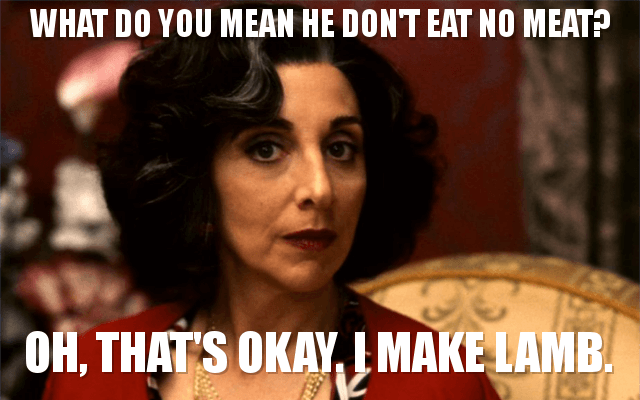 I became a vegetarian in 2013 because I no longer wanted to be a hypocrite. I would wipe away tears after watching videos about factory farming and the horrible conditions in which the animals lived before they ended up on my plate…but I’d still order the bacon cheeseburger and enjoy it. When it finally occurred to me that my actions directly conflicted with my feelings and beliefs, I looked at what I ate and how I could change that to find mental peace with what I consumed. This was in my dieting heyday and, at the time, I felt like it was completely for ethical reasons.

Initially, I did not choose to completely give up meat. I read Eating Animals by Jonathan Safran Foer and learned about how animals can be raised with care and humanely slaughtered. I thought this was the perfect middle ground for me. I could still eat meat, but I could do so without guilt.1 I did my research, spoke to local farmers, and bought those meats a farmer’s market. I went about cooking my meat-based meals as usual, but something just felt off. I couldn’t get past the image of the slaughtering process. The fear in the animals, the blood, and the taking of a life all weighed heavy on me. One night I had cooked chicken for my husband and myself. After we sat down to eat, I looked at the chicken on my plate and I just couldn’t do it. I decided at that point that I wanted to be a vegetarian. I wrapped up my chicken and told my husband he could eat it later when he got hungry.

Because I know that there are certain important nutrients in meat, I did research to make sure that I knew about other sources for those nutrients. I even picked the brain of one of my work colleagues about everything vegetarian like fake meat and tofu. I learned about hidden sources of animal products in foods like gelatin and Worcestershire Sauce.2 I had immediately felt at peace after making the decision to give up meat, but there were some unexpected challenges that came up.

Though I was never a big meat eater to begin with, I found it hard to wrap my head around the way my dinner plate looked without meat. Many of my meals were meat with a veggie and a starch. I felt like there was something missing from my plate when I went meatless. After getting over the visual difference, I found that I felt satisfied when I added in other sources of protein to my day. Sure, I began to eat more eggs, Greek yogurt, and beans, but the one food I was excited about eating more of was nuts! I love, love, love nuts, and now I would be required to eat more nuts for the protein.3

Dinner was also interesting when it came to making meals for both my husband and myself. I give my husband tremendous credit for trying the whole vegetarian thing, but it just didn’t work for him. Although he has taken a liking to veggie burgers, he just needs meat with some meals. He attempted a meat substitution in his “turkey” sandwich, but it wasn’t sustainable. I had to respect and honor that. He was listening to what his body was telling him and his body was saying “meat please”.4 I’m grateful for him even attempting to go meatless, and he really has been eating less meat overall. He once gave me the best compliment about a dish I made for dinner. One evening I was making vegetarian chili5 with honey cornbread and asked him if he wanted some meat in his chili. He shook his head and told me that I’m getting so good at cooking vegetarian dishes that he would be fine without it. I was quite pleased with myself! Not only did he praise my cooking, I had shown him how food can be yummy without meat!6

Another minor obstacle that I encountered was having to explain what it meant for me to be vegetarian. In my research, I learned there are different types of vegetarians. I fell into the ovo-lacto vegetarian category since I don’t eat animal flesh, but I do consume eggs and dairy. However, I don’t typically use the term vegetarian because I feel it can have a pretentious undertone to it. I usually just say “I don’t eat meat”. I learned that that could be misinterpreted when I met my father for one of our weekly dinners. We were going through a Subway phase and were splitting a footlong sandwich between the two of us. When we met up a few days after my I’m-no-longer-eating-meat announcement, he asked if I wanted to split a turkey sandwich. I looked at him with a quizzical look on my face thinking that his memory must be going. I reminded him that I don’t eat meat. He said, “But it’s turkey!”7 I chuckled to myself and explained that if it had a face, I wasn’t going to eat it. It hadn’t occurred to me that he understood “not eating meat” as “not eating red meat” and, since turkey is not red meat like beef is, then it must be fair game. For me, if it’s flesh, I’ll pass!

I questioned my vegetarianism when I began reading books about eating disorders. Was I shunning meat as an excuse to diet? Was it another form of restricting? I examined my motivation for becoming a vegetarian and, after much reflection, I feel confident that I am not using vegetarianism as a dieting tool. If I had intense cravings for meat, had never read Eating Animals, or had never seen any videos about factory farming, then I may have come to a different conclusion, but my motivation stems from ethical reasons rather than a weight loss technique, so, to me, that is not restriction. Though I can see how giving up meat can be dieting in disguise, I believe I am beyond that and am opting to not eat meat for non-dieting reasons. I am happy that I don’t support factory farms, and I purchase my eggs and dairy from farmers who humanely raise their animals. I no longer feel like I’m a hypocrite and that my actions finally back up my beliefs.

If you are a vegetarian or a vegan, what is your motivation? Please share in the comment section below.

2Can anyone say “Worcestershire” properly? Please teach me!

4I now buy him humanely raised and slaughtered turkey deli meat at the store. Yeah, it’s pricey, but it’s totally worth it!

5Though some chili purists would argue that there is no such thing as “vegetarian” chili.

7This reminds me of the “What do you mean he don’t eat no meat?” scene from My Big Fat Greek Wedding.

4 thoughts on “Is My Vegetarianism a Form of Dieting?”