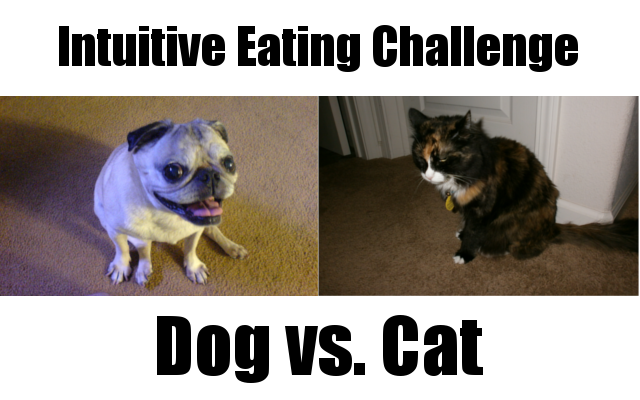 I am a cat person. I am not not a dog person, but I just prefer cats. My most recent dogs have been pugs and I actually have a rescue pug right now.1 Over the years I have noticed something interesting while observing my pets around food. I would like to take a moment to compare my pugs to my cats in terms of their approach to food. So, without further ado, I would like to announce my pet-inspired Intuitive Eating Challenge!

Dog Intuitive Eating Challenge Results: My first rescue pugs came in the form of a bonded female pair named Rocky and Buster Sue. I was told that some pugs have a tendency to overeat and are prone to weight gain. I had firsthand experience with this thanks to my Buster Sue.

My husband and I normally fed the girls in the late afternoon. One day we poured their food into their bowls as usual. Normally the sound of the kibble hitting the stainless steel bowl would be immediately be followed by the scurrying of pug paws across the floor. This particular day there was only one pair of paws approaching and that was from Rocky. Buster Sue arrived a few minutes later, but she didn’t have her usual gusto when she ate. My husband and I shrugged and let it go. A while later we went into the spare bedroom for something and noticed that the closet door had accidentally been left open. Our eyes followed the trail of kibble up to a torn bag of dog food. Based on Buster Sue’s lackluster reaction to her meal, we suspected that she had gotten into the bag of food…and there was a serious dent in the amount of food that remained in the bag! This pug had zero restraint. Not only did she have her dog food binge, she still ate her regular meal! I learned that Buster Sue was not an intuitive eater. I also learned that overconsumption of dog food wreaks havoc on a pug’s digestive system. I have some permanent stains on my carpet to remind me of this.

Cat Intuitive Eating Challenge Results: I was a cat-owning-virgin when I rescued my first cat, Brooke, in late 2011. I had never had a cat before and had no idea if cats had to be fed on a regular schedule or if I could just leave food out to be eaten as needed. Brooke’s foster mother said that free feeding would be fine. The Buster Sue incident flashed in my mind, but I figured that this lady knew what she was talking about.

As instructed, I began free feeding Brooke and made some interesting observations. First of all, Brooke would casually approach her food bowl and be there for only a few minutes at a time. She would daintily nibble her food and then saunter away. That was all the food that she needed at that time and had no problem leaving food in her bowl for later. The other thing I noticed was that Brooke wanted her food to be at a certain height. It had to be just-so.2 If her food mound was too low, she would follow me around and meow for food. I would remind her that she already had food,3 but of course I caved every single time and would replenish her food so it met her specific expectations. Unlike my Buster Sue, my Brooke is an intuitive eater!

Brooke won the Intuitive Eating Challenge, hands down. As I think about each scenario, I feel like I could learn a little something from each of my pets. Buster Sue taught me that, yes, food can be yummy, but there can be too much of a good thing. Brooke taught me that having high expectations is nothing to be ashamed of. Why not insist upon a more pleasurable eating experience?4 She also taught me that it’s totally fine to not eat everything that is put in front of you. I never would have thought that I’d be taking eating lessons from a pug and a cat. Thank you for the tips, Buster Sue and Brooke!5

If you have pets, what do you notice about their eating habits? Are they intuitive eaters? Please share in the comment section below.

1He’s really bonded to my husband even though I’ll do in a pinch.

2Brooke is now referred to as Princess Brooke. Can you guess why?

3As if she speaks English!

4I ended up following her lead recently. Read about it in “Did I Just Refuse a Donut?”

5Yes, the posted pictures are of my Buster Sue and my Princess Brooke! They’re cuties!