Forbidden Foods Are In My House...EEK! - My Mind My Body
ShareTweet

Does this sound familiar to you? You love cookies1 and feel you have no restraint around them. You tell yourself that if you have them in the house, you’ll eat them until they’re all gone. You know that you will end up feeling stuffed, physically uncomfortable, guilty, and ashamed. So, what do you do? You vow to never have that food in the house again!! That should be the end of it, right? Unfortunately, it doesn’t work that way. Your body and mind will know that it’s being deprived of a certain food and want it that much more. You’ll cave, buy a bag of cookies, and end up overeating them. It seems like a cruel joke, but your body really is smarter than you and is simply reacting to deprivation.

A forbidden food is the result of food rules that you have implemented on your diet. Once a food has a food rule, you begin to criminalized it with labels such as “naughty” or “bad”. When you do this, you begin to deprive yourself of the food because you don’t want to break your food rule. However, these foods become more appealing and desirable, but because you have given them a negative label, feelings of failure and guilt arise when you consume that food.

I certainly created food rules during my dieting years, and this led to having a list of forbidden foods. I found that I would do one of two things when I had a craving for one of these foods:

So, you may be asking yourself “How do I legalize my forbidden food and keep it in the house?” That really is an excellent question, and I’m going to share what I found worked for me.

Based on my experience, this is my suggestion. Go the the store and buy the food. And then buy more…and more. Buy pounds and pounds of the stuff and then bring it home. If it’s perishable, freeze it. The point is that you have access to it all of the time. This will seem terrifying and you have a right feel that way because this is new territory for you. You may eat this food at every meal for several days (maybe even longer), but over time your body won’t feel deprived of the food anymore because you will have constant access to it. Your body will also start craving other types of foods. At that point, listen to your body and eat those other types of foods. If you feel like eating your forbidden food again, then give yourself permission to do so. At some point, it will no longer be “forbidden food” and just be “food”. Start slowly and do this with just one of your forbidden foods rather than doing it with multiple foods at once. Once you feel that food is no longer forbidden, move on to the next one. Baby steps!2

That was exactly what I did with one of my forbidden foods. It wasn’t one that I initially labeled as “bad”, but it ended up with that label nonetheless. Okay, here is my confession: I love nuts! I haven’t met a nut I didn’t like. Sure, I favor almonds over macadamia nuts, unsalted over salted, but put a nut in front of me and I’ll eat it. This food became forbidden for me when I was dieting. Because nuts are considered healthy, I felt they were safe to eat to curb my appetite. What ended up happening was that I’d eat more than I intended to because I was so biologically hungry. I began to associate nuts with overeating which violated my food rule of eating as little as possible. Nuts slowly became my forbidden food due to the feelings of guilt from eating more than I thought I should.

It took me a long time to allow myself to have mass amounts of nuts in my house, but now my bottom refrigerator drawer is full of nuts. Pounds of them! I currently have pistachios, cashews, almonds, walnuts, and Brazil nuts.3 There is no way I could eat all of those nuts in one sitting even if I tried. However, now I don’t feel deprived in any way. Some nights I have a few handfuls. Other nights, I don’t touch them. My body and mind know they will be there when I need and want them.

Once I had success with decriminalizing nuts, I slowly moved onto to other foods like baked goods and tortilla chips. Now all foods are permitted in my house.

Like I said, this is scary and it may take some time, but know that you are legalizing food when you do this. You will no longer be labeling food as forbidden and giving it more power that it should have. Food will be food. To be completely honest, this process may not always be easy and there will be bumps in the road.4 However, if you are persistent, then your eating experiences will be more satisfying because they will be free of guilt and negative thoughts. 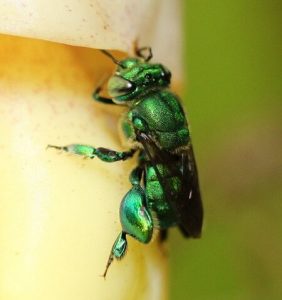 1Feel free to replace cookies with one of your forbidden foods.

2For more of my thoughts regarding baby steps, check out “The Veruca Salt Effect: I Want It Now!”

3The bees that pollinate Brazil nut tress are amazing. Check out that picture. They are like honey bees on steroids!

4I wrote about those bumps in the road in “Never Give Up! Never Surrender!”

6 thoughts on “Forbidden Foods Are In My House…EEK!”