Mourning: An Unexpected Part of Intuitive Eating - My Mind My Body
ShareTweet 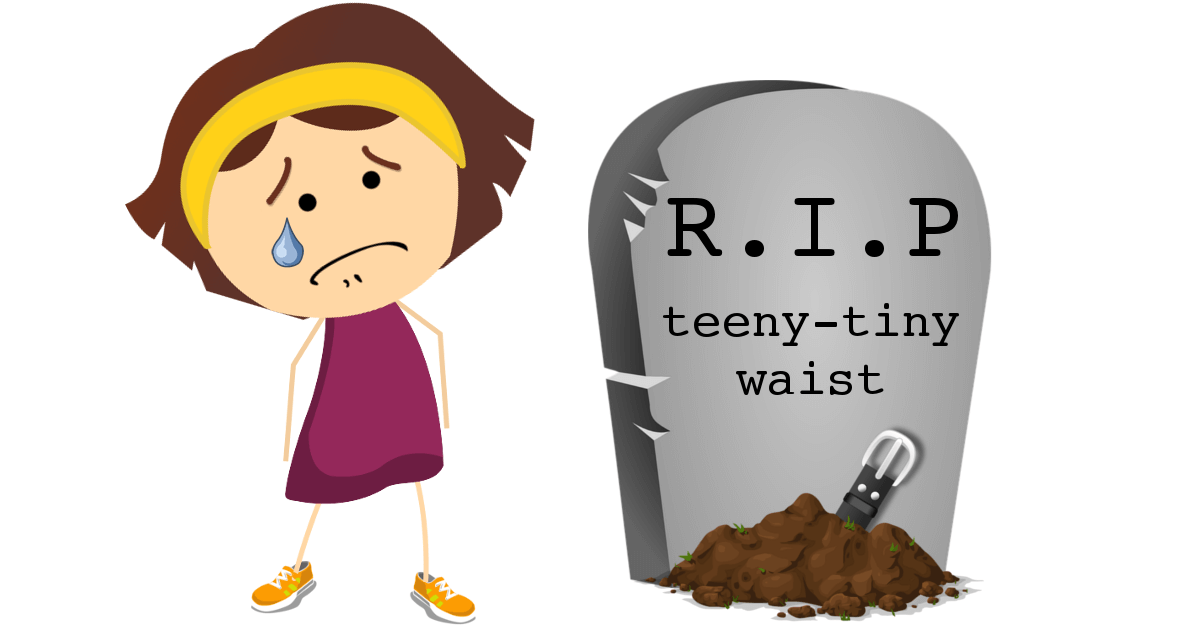 When I think of the word “mourning”, I imagine a weeping widow wearing all black or someone bursting into tears upon hearing a song a loved one once adored. Of course, mourning can be defined as deep sorrow after someone has died, but it also has a more general meaning of sadness after a loss or disappearance of something. I never thought it would be part of my intuitive eating journey, but, as time went on, I found myself in mourning with respect to my body and to food.1

When I started dieting, the thought of buying a new wardrobe was exhilarating! I couldn’t wait until the day when I could walk into a store and buy a pair of jeans a size smaller. The day finally came when my jeans became too loose and wearing a belt just wasn’t cutting it anymore. With a spring in my step, I hopped in the car and drove to the mall. I entered the Gap and browsed their selection of jeans before settling on boot cut as my style of choice. I grabbed a pair in a smaller size, but I also grabbed a pair in my typical size because I’m cynical and didn’t really believe I had lost enough weight to drop a whole size.2

After entering the dressing room, I put on the pair of jeans in my typical size and, with a sigh of relief, took them off because they were way too loose. On to the smaller size! Woo-hoo! I couldn’t wait to see how those fit. After they were buttoned and zipped, I stood there in shock for a moment. Those didn’t fit either. I needed to go down to the next smaller size! The kind saleswoman got me the jeans and I paused before I tried them on. Did I really lose enough weight to go down two sizes?! As I drew the jeans up my legs, I could feel the denim slightly hug my thighs and sit comfortably around my hips and lower belly. Oh my goodness, they fit! Pride and delight washed over me as I stood staring at myself in front of the mirror. I thanked dieting for giving me this amazing moment.

Years later, when my mind finally agreed with my body that that dieting was harmful, I looked back at that moment in the Gap dressing room and realized that I would not experience that moment of euphoria again. Although I knew I would be healthier carrying around a few more pounds, I nevertheless mourned the fact that I would never have that feeling of success after weight loss again.

IE brought about other instances of mourning that I wasn’t anticipating. The whole purpose of me dieting was to achieve a certain body shape. Yes, I wanted to be thinner in general, but I loathed my stomach rolls. When my parents were young, their bodies were in proportion, but, as they aged and put on weight, their bodies became apple-shaped. This was my genetic destiny. There are many different body shapes, but I have always disliked this one in particular. The dieting industry tells me that this shape is ugly and unattractive. Women are supposed to have voluptuous, hourglass figures. I began to see apple-shaped women as pregnant-looking and out of proportion and I began despise my stomach. As I lost weight, my stomach became smaller and I finally achieved a flat, toned stomach.3 But it cost me my health.

I had always wanted a flat stomach, so I resisted putting on weight because I knew that I would lose my ideal body when I began to eat more regularly.4 I lamented the fact that my stomach wouldn’t be as small as it used to be; I couldn’t help it. But I realized I could never look that way again and be healthy at the same time. After many up and downs with IE, I slowly began to feel comfortable with my newer, softer body.

I not only had to mourn the body that I wanted and strived to get with dieting but also some foods that lost their appeal for me. When I started restricting, I had to trick myself into thinking certain foods were yummy because that made dieting easier. When I started with IE, I made a conscious effort to be more mindful and think about if I truly liked a food. Sometimes I did and sometimes I didn’t. I find that there are certainly foods I enjoy still, but none have the same alluring quality as they once did. What I’d scarf down before because I thought it was so delicious became mediocre.5

I had always associated the concept of mourning with death, so it had not occurred to me that I would go through a period of mourning when giving up dieting. I grieved never again being thrilled about fitting into smaller pants, having a flat stomach, and being over-the-top excited about food. With that, I am learning to accept that I will look different when I’m healthier. I don’t see my ribs or hip bones as much anymore because I have a fuller midsection…and this is a good thing! I am more accepting of my body and at peace with food in general, so the trade off is worth it.

Did you go through a mourning period once you got into intuitive eating? Please share your thoughts in the comment section below.

1Yes, it is mentioned in the book. I think in my haste to become an intuitive eater, I glossed over that small section.

2I believe that numbers are not important here, so I decided not to include any actual sizes. We are bombarded enough with numbers as it is. I wrote about this in “Numbers, Numbers Everywhere”.

3Never mind that you could see quite a few of my bones too.

4My resistance is documented in “You Can’t Tell Me What To Do!”

5This is due to something called “habituation”. More to come on that topic!!

12 thoughts on “Mourning: An Unexpected Part of Intuitive Eating”