The Clean Plate Club - My Mind My Body
ShareTweet 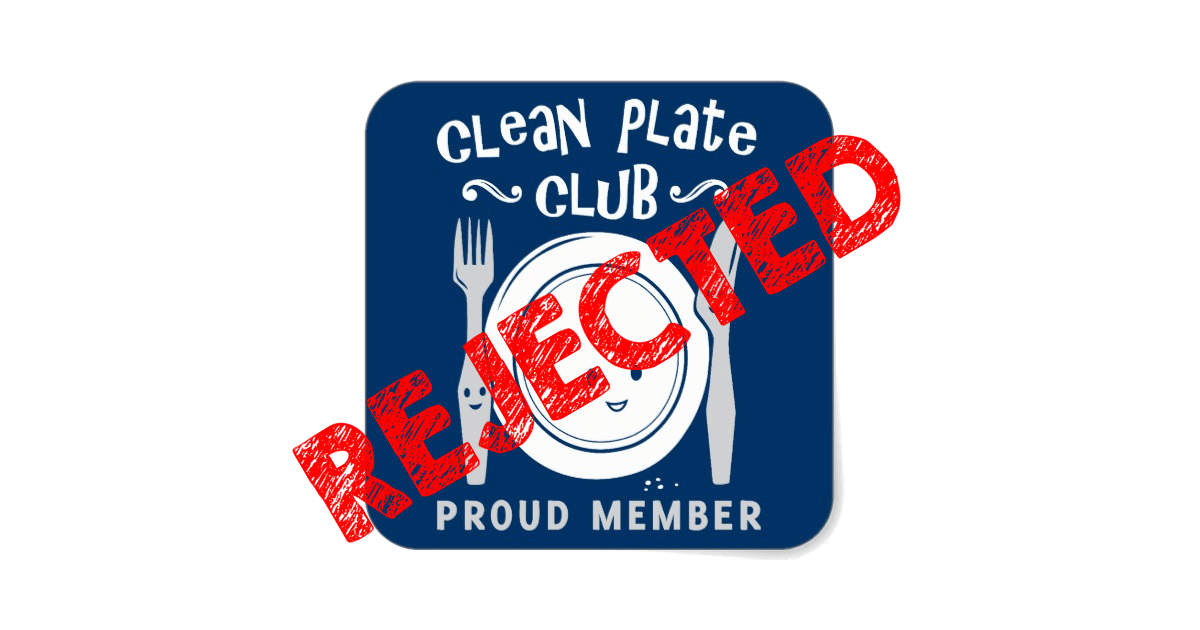 As a dieter, I had oodles and oodles of food rules. One such rule was that wasting food was a no-no. This meant I had to eat everything that was on my plate and I had to make sure food was eaten before it spoiled…even if I didn’t want it! To a non-dieter, this probably sounds a little cuckoo. Normal eaters listen to their fullness cues no matter how much food remains on the plate. They also make decisions about what to eat based on what sounds good rather than by an expiration date. I eventually broke this food rule by reflecting on my history and slowly making changes.

When I was younger, my brother and I spent our summers at our grandparents’ house. My grandfather was a joker and never let an opportunity go by to tease me. We often ate dinner together and he would notice if I left food on my plate. If I did, he’d tell me with a jolly laugh, “Your eyes are bigger than your stomach!” He never meant any harm by it; he was simply pointing out that I had put more food on my plate than I was hungry for. When I was in elementary school, I took this comment in stride, but by the time I had reached my early teen years, I had been seduced by the diet culture and this comment made me self-conscious. I began to feel like my plate had to be clean by the end of a meal.

This was reinforced many times over the years, but an innocent comment by a waitress sticks out in my mind. I was very close to my father, and we met up every week for dinner. We were on an IHOP kick for a while because I couldn’t get enough of their pumpkin pancakes.1 One order consisted of 4 pancakes. I would always eat only 2 or 3, so without asking, our regular waitress would bring me a to-go box at the end of the meal. One day I was especially hungry and ate all 4 pancakes, so I didn’t need the to-go box. When the waitress saw my clean plate, she nodded in approval and said, “Good girl!” I didn’t quite know what to say. Why was I good for eating 4 pancakes when I was hungry for 4 pancakes? Was I somehow bad all of the other times I left food on my plate? I’m sure she had good intentions, but it left me unsettled.

Getting to the point where I was even a little okay with not eating all of my food was quite hard. I had always been a Clean Plate Club member because I had been taught over the years that leaving food on my plate was bad. Because I’m all about baby steps, I decided face this issue by starting small.

By nature, I resist change. I thought I could avoid the uncomfortableness of change by simply taking a smaller portion of food and allowing myself to add more to my plate if I was still hungry. It was mentally easier for me to add food to my plate than to throw it away. Though this was a helpful step in giving myself permission to eat more, I still had to tackle my rigidity with wasting food because I can’t control portions in every single situation.2

A natural opportunity to practice this came about one morning when I had an egg and toast for breakfast. Because I was more in touch with my fullness, I determined that I was full and satiated…but there was still some food left on my plate! I had a mental battle for a moment. Deborah, if you don’t finish your food, the food will go to waste! Deborah, you’re not hungry anymore, so you don’t need to eat that last bite! I ended up leaving a small bit of egg on my plate and later giving it to my dog. My dog was thrilled and I finally was able to leave a meal without forcing myself to clean my plate.3

I knew that I could shred my Clean Plate Club card when I chucked a few pears into the compost bin. Bosc pears are my favorite pears.4 My local grocery store didn’t have them one day, so I opted for another type. When I got around to trying one, I took one bite and wasn’t impressed. For good measure, I gave it another shot but said “nope”. I promptly gathered my partially eaten pear and the other two in the fridge and tossed them into my compost bin. No guilt.

Because the idea of throwing food away gave me all kinds of anxiety at first, I learned to remind myself of a few things that helped me overcome this:

Although this was not as challenging as giving up the scale, this was a hard-earned victory for me. Whether cleaning your plate was a food rule you imposed upon yourself or it stems from your childhood, it is a food rule that you can break. At that point, you can officially tear up your membership card to the Clean Plate Club!

1If you haven’t tried pumpkin pancakes, finish reading this and then run to IHOP. I prefer without whipped cream, but whatever floats your boat!

3Though it was win-win, I think my dog felt he got the better end of the deal.

4They’re brown. Not a very appealing color for fruit…but they are so yummy!!

5If you are a veterinarian, please don’t yell at me.

2 thoughts on “The Clean Plate Club”