I Gained a Pound! - My Mind My Body
ShareTweet 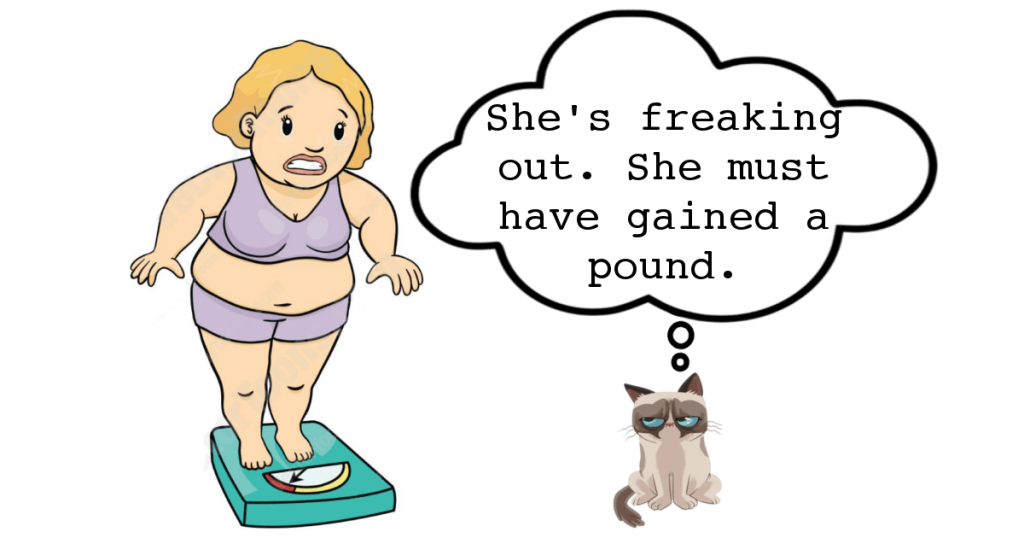 There are two things you should know about me: 1) I sometimes blow things out of proportion and 2) I have a tendency toward pessimism. These qualities have always been part of who I am and I’m okay with that. Although I am now working on lessening their impact in my life, they played a major role in my thoughts and behaviors when I dieted. They were never more obvious than when I stepped on the scale during my morning ritual and saw that I had gained weight.

When I first started Weight Watchers online in an attempt to lose a few pounds, I got on the scale on Monday mornings on what I considered my “weigh day”. Like a good girl, I’d dutifully tracked my weight as instructed by Weight Watchers. What started as a weekly thing slowly became a daily thing. It then transformed into an fixation.

In my scale-obsessed dieting heyday, I not only weighed myself daily, I would sometimes weigh myself several times within the span of a minute in hopes of seeing a lower number. I also wanted the number to be as low as possible, so I would never weigh myself any other time than first thing in the morning when my stomach was empty. My brain would reel with thoughts of all of a sudden becoming fat if the number didn’t go in the right direction. Blowing things out of proportion? Check! The number controlled me and I would have a minor freak out if I had gained any weight. Was I pessimistic? Yup! I felt like I had completely failed if the number had increased, even if only slightly.

When I started intuitive eating, I desperately tried giving up the scale. However, the scale remained in my life for about a year until my father’s death nudged me into realizing how meaningless it was. I then gave it up but not without learning a thing or two about what can influence the number on the scale. It finally occurred to me that there are so many factors that go into what number is displayed that I should view it with a fair amount of skepticism.

Other than actually having more body fat, here are some reasons why the number on the scale might go up for people:1

Now that I have this knowledge, it seems silly to rely on a number that is so unreliable! When I feel myself start to freak out in any aspect of my recovery, I remind myself that my feelings will pass and I look back at reminders such as this list to keep things in perspective.4 I try to squash my pessimism by telling myself to look at things in a more positive light. It’s not the end of the world if my weight fluctuates. I have so many wonderful qualities that make up who I am that my weight should only be a passing thought, if that.

If you’ve read some of my other articles, you may have noticed that I enjoy quotes. Here’s a fitting one that I want to leave you with: “The scale can only give you a numerical reflection of your relationship with gravity. That’s it. It cannot measure beauty, talent, purpose, life force, possibility, strength or love.”5 This quote reminds me that I am more than a number on the scale and any change in that number is irrelevant.

How do you react when the number on the scale creeps up? Please share in the comment section below.

1I want to forewarn you that this includes some talk of bodily functions. We are discussing the internal workings of our bodies, so that only makes sense, right?

2Damn, my body is smart!

3I have a digital scale, so this might not apply to other types of scales.

5Thank you, Steve Maraboli, for such beautiful words!