"When the Fat Girl Gets Skinny" - My Mind My Body
ShareTweet 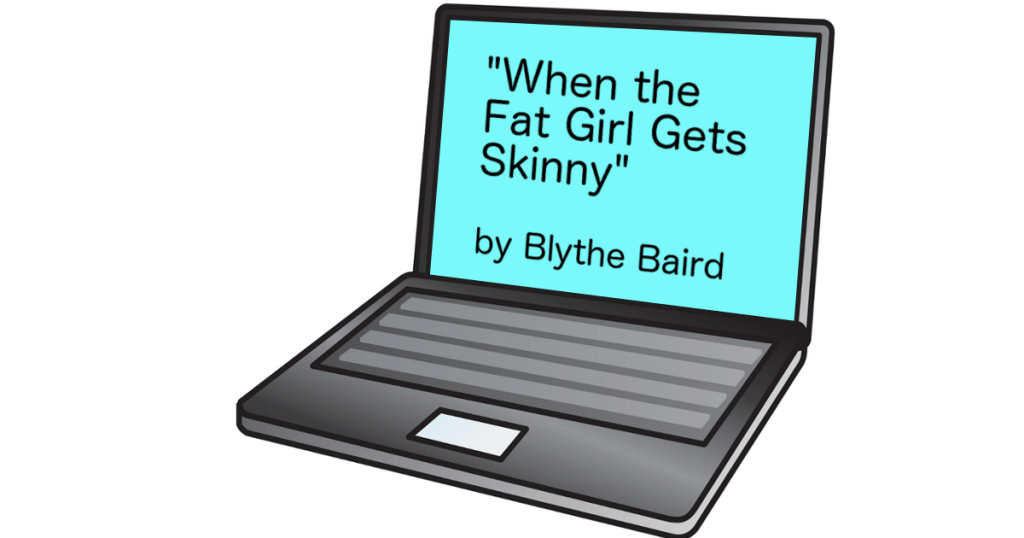 I was skimming through the intuitive eating community forum one day and came upon a post that included a link to a video on YouTube. It was short and I had a few minutes, so I figured “Why not?” Within a few seconds of watching this video, I knew I had stumbled onto something. As the video played, I found myself nodding in understanding and empathy. I could identify with almost everything that was said. That evening, I made my husband sit down and watch this video with me. Even he was moved by the speaker’s strong and passionate words. I am referring to Blythe Baird’s “When the Fat Girl Gets Skinny” video.

Although this entire video spoke to me in one way or another, there are a few lines that resonated with me. These lines gave me a profound sense of “I am not alone” and they still strike me when I watch the video.1

Or how many more productive ways I could have spent my time today besides googling the calories in the glue of a US envelope. (0:35)

My obsession with numbers started off innocently enough, but it quickly picked up speed. I was not only preoccupied with the number displayed between my toes when I stepped on the scale, I also religiously counted calories. It was all-consuming. I remember going onto a calorie counting website and looking up how many calories were in a clove of garlic. Then I sweated over if it was a small clove or a large clove. All of this over garlic! Instead, I could have volunteered at an animal shelter and helped find homes for some lonely and needy pets. Or I could have learned a few new songs on my piano. I can only imagine how much more proficient I’d be if I’d taken the time I had spent looking up calories and played my piano instead. The past is the past, but I can’t help but wonder “what if” sometimes.

As a child, “fat” was the first word that people used to describe me which didn’t offend me. Until I found out it was supposed to. (1:00)

When I was very young, I didn’t know I was supposed to look a certain way, that society would only find me pretty and attractive if I met certain physical criteria. This knowledge was not something I was born with; it was something I learned. Only when I heard comments from people about how “big” I had gotten or how I’d “put on weight” did I think something was wrong with the way I looked. Those people probably had good intentions, but those comments stayed with me over the years and built the foundation for my eating disorder.

If I had to pick the one quote from this video that made me pause, it would be this one.2 I was never one who was fat, but I was also never thin. At my highest weight, “plump” might have been used to describe me. When I began to lose weight, people praised me. It was only when I could see some of my bones that the compliments stopped coming. Although I exhibited the same behaviors when I was plump as when I was thin, my eating disorder was initially reinforced because losing weight when you have some to spare is considered taking care of your physical health. My mental health would beg to differ.

I used to love the feeling of drinking water on an empty stomach, waiting for the coolness to slip all the way down and land in the well. Not obsessed with being empty but afraid of being full. (2:25)

This may not make sense to some people. For me, it not only made sense, it was a physical feeling that I yearned for. I feared having fat on my body so much that I chose to go hungry rather fuel my body adequately. I believed that if my stomach was empty, then my body couldn’t convert any unused calories into fat. In my mind, an empty stomach led to thinness while a full stomach led to fatness. It was all very black-and-white. Over time, I learned that being full isn’t something I should fear. It’s really just my body telling me that it has enough fuel.

Now I am proud. I have stopped seeking revenge on this body. This was the year of eating when I was hungry without punishing myself. And I know it sounds ridiculous but that shit is hard. (2:42)

It does sound ridiculous to congratulate myself on eating when I’m hungry, but the diet culture had so severely embedded itself into my psyche that eating without judgement seemed unthinkable. Simply eating a small orange for a mid-morning snack one day at work was a huge step for me in honoring my hunger. Initially, I felt like I had to account for those calories in some way. I desperately wanted to add a few extra minutes to my workout or put a little less rice on my dinner plate. I had to deliberately stop myself from doing these things because punishing myself for eating had nearly ruined me. It got easier over time, but Blythe Baird was right. That shit was hard!

I don’t know if you decided to watch the video or not, but I thought it was important for me to share this significant part in my recovery. This video not only made me realize the extent of my eating disorder, but it also helped me buckle down for the hard work ahead of me. I am not a huge fan of poetry, but I have watched this multiple times and it still has a strong effect on me, even today. I hope that this video or my commentary supports you in your recovery. You are not alone in this.

1I noted the approximate timing of the quote in the video in parentheses.

2If you listen carefully, some members of the audience gasp. It appears that other people found this quote powerful too.

2 thoughts on ““When the Fat Girl Gets Skinny””