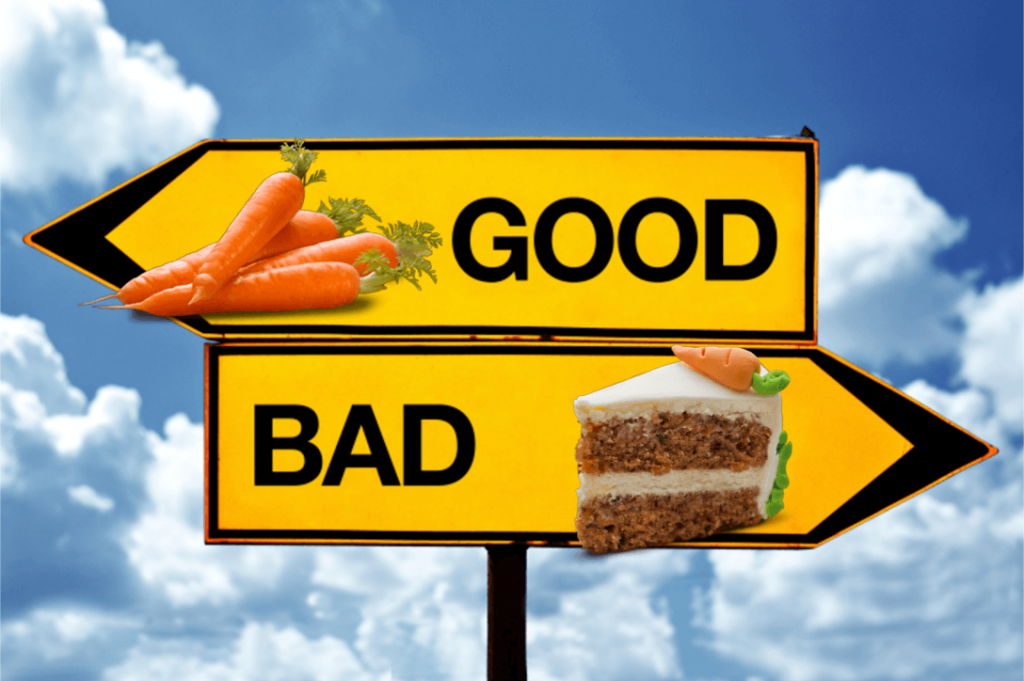 I was reading the newspaper1 the other day when a topic in an advice column caught my eye. A person posed a question about her diet and stated that she had eliminated dairy and bread because they’re unhealthy. My immediate reaction was to wonder why those would be considered unhealthy. Dairy has calcium and bread has a bunch of B vitamins. Then I remembered the fad diets that have been thrown at us, so the “unhealthy” label slapped on dairy and bread made sense. But are those foods really “bad”? If not, then are they “good”? Hell, should we even label them at all?

I was not immune to labeling foods when I was in diet mode. I remember sitting at my desk with a “bad” donut in front of me, mesmerized by the thought of what it would taste like. I told myself I shouldn’t eat it. My diet didn’t allow it. After agonizing over whether or not I should eat it, I lost it and just gave in. I consumed my donut with such ferocity that the whole experience seemed to be over within seconds. Then the inevitable happened. An overwhelming wave of guilt consumed me. Why the guilt though? Did I steal the donut? No. I began to wonder why I felt this way for eating, an act necessary for basic living.

My husband is a naturally intuitive eater, so I approached him to talk about these feelings of guilt. He looked at me incredulously when I wanted to know if he ever felt guilty after eating. “Why would someone have guilt after eating?” he asked. I was at a loss for words. My mind raced for a logical answer to his question. Carrots are healthy and carrot cake is not. Salads are good and burgers are bad. Says who though? I mumbled a response and began to ponder where I even got these ideas from.

Dieting comes with a set of rules. Each diet is different, but rules are a constant. Having diet rules naturally led me to the idea that following the rules is good and breaking the rules is bad. This then transformed into “I’m good” or “I’m bad” depending on how my diet went that day. It reminds me of when I was younger and my teachers had established classroom rules. If I followed the rules, parent-teacher conferences were followed by smiles of pride from my parents. If I broke the rules, I was met with disappointment and punishment. Dieting is no different. Judgement was always present based on how well I followed the rules.2

Guilt is a byproduct of judgement. When I judge food negatively, I vilify it.3 The guilt comes about when I feel I failed at my diet by giving in and eating the “naughty” foods that go against the rules. I feel weak and ashamed, like I lacked the willpower to be “good”. I have come to learn that the quality of my character is not in any way related to how well I adhered to foolish dieting rules.

Some people get around this constant restriction by having a “cheat” day. To me, that still implies that rules are broken in some way and that enjoying food is on the same level as cheating. It doesn’t matter whether the word “cheat”, “bad”, or “naughty” is used as a descriptor; food is still demonized. I now shake my head at the absurdity of equating eating a donut with lying on my taxes or committing adultery.4

So, how did I stop feeling guilty about eating certain foods?

Diet culture trained me to feel proud or guilty about my eating choices when there is nothing inherently right or wrong with any type of food. I should be able to enjoy all foods on a regular basis. And now I do! I notice what I eat, but I don’t judge.

If you are someone who experiences guilt when eating certain foods, I completely empathize with you. Slowly begin to release the judgement and the guilt will fade. I know it’s easier said than done, but just take it one bite at a time.

Do you feel guilty when you eat certain foods? Please share your experience in the comment section below.

1Yes, I still read the newspaper. I’m such a luddite sometimes!

2Judgement can be subtle and come in other forms too. Ever notice how we have a Devil’s Food Cake and an Angel’s Food Cake?

3Likewise, when the judgement has a positive spin, I put the food on a pedestal.

4Neither of which I have ever done!