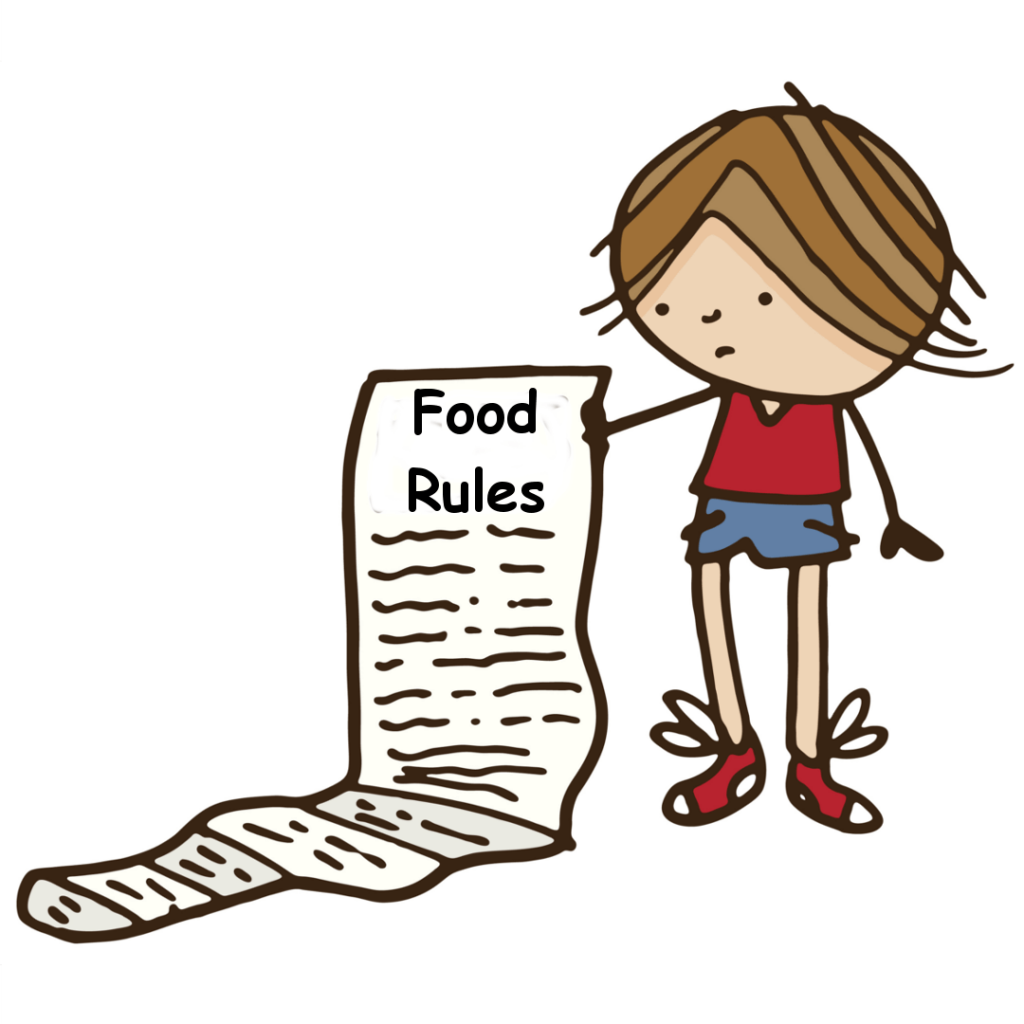 If you watch a typical infant eat, you will see an intuitive eater. The child will cry when hungry and turn its head from the breast or bottle when full. As we grow up in western society, we learn food rules. Whether imposed by our family members or suggested by the dieting industry, these rules change our relationship with food.

When I was dieting, food rules ruled my life. From when to eat to how much to eat, they guided me from the second my eyes fluttered open in the morning to the moment they shut in the evening. At first it was comforting. My Type A personality craves structure and having a plan in any part of my life makes me feel calmer and in control. The diet plan of choice for me was Weight Watchers. It lured me in with its so-called flexibility when it was an honest-to-goodness diet. I was told I could use my “points”1 in any way I chose. Hell, I could even earn “points” through exercise. Although I told myself I was being healthy, I really was creating the foundation for a disordered relationship with food. What had started as a few rules slowly evolved into an unyielding laundry list of do’s and don’ts.

When I realized how miserable I was and decided that I had had enough of dieting, I knew I had to slowly chip away at my rigid set of rules. This was no easy task because my list of rules was quite extensive and had been ingrained in my mind for so long. Just look at how dieting controlled my life!

It took me over a year to overcome these rules.5 I went about it using baby steps and worked on loosening up one pesky food rule at a time. Instead of forcing myself to wait until lunch to eat, I began allowing myself a small mid-morning snack. I gave myself permission to eat a few extra nuts above and beyond a serving size.6 Rather than having a firm, one hour workout rule, I made an agreement with myself to stop 5 minutes early so I could understand that nothing awful would happen if I didn’t workout for a full 60 minutes.

Once I allowed myself the gift of true flexibility and gave myself permission to eat in a way that honored my body, my food rules slowly began to fade. Thankfully, the wall of rules I had built for myself crumbled and is now part of my past.

1A shady euphemism for calories!

2Oddly enough, once I had food freedom, figuring out what I wanted to eat was tough because I was so used to diet rules dictating my food choices.

3Okay, you caught me. This isn’t a food rule per se, but disordered exercise was definitely intertwined with my disordered eating. They’re both under the same screwed up umbrella!

4I also ignored how good exercise made me feel afterwards. It was all about the calories. Now I love the the endorphin rush!

5Just look at how restrictive diets are. It’s no wonder that it took so long!

6On the flip side, I also told myself that I could eat less than a serving if I wasn’t super hungry.