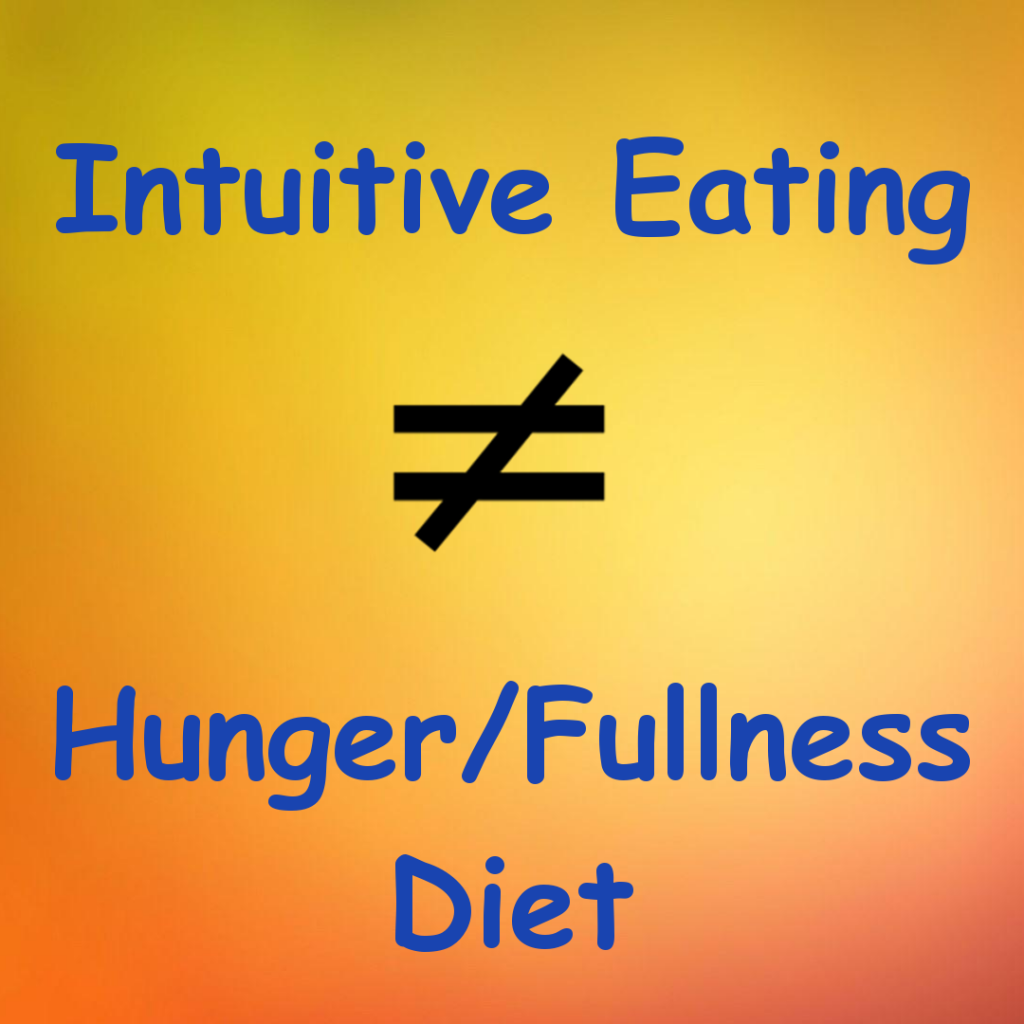 About a year ago I got a ticket for running a stop sign. As you probably guessed, I was much more cautious when driving after that. Well, at least for a few days. Gradually, my old habits of rolling through stop signs and going a bit over the speed limit crept back into my routine.1 A few weeks later, I was processing my eating issues with my therapist when it hit me that the same thing was happening as I moved along in my intuitive eating journey. Old habits bring a sense of comforting familiarity and that sometimes causes us to take a step backwards. This was never more true than when I subconsciously tried to blend my dieting habits with intuitive eating.

So, how did this all come about? Despite my skepticism of intuitive eating, I had a glimmer of hope and, dare I say, excitement when I read about it. The idea of breaking free from the cruel clutches of dieting and being at peace with food and my body was like seeing the first glimpse of blue sky after a storm. I just had to eat when I was hungry and stop when I was full. It seemed shockingly simple.

A curveball was thrown my way though. One very powerful and alluring feature of dieting was its rules. I didn’t have to analyze what my body was telling me; the diet would dictate all aspects of my food consumption. As confining as it was, it also brought a sense of calmness. Without realizing it, I started turning intuitive eating into the hunger/fullness diet.

If I had continued in this manner, the hunger/fullness diet would have imprisoned me just like a traditional diet. Although “intuitive” would be slapped in front of it, I would still be forced to abide by certain parameters.2 I could only eat when I was hungry and I had to stop when I was full. The essence of intuitive eating is about more than this though. It’s about living your life based on your instinct and intuition rather than on outside influences.3

Because I still crave structure to a certain degree, I occasionally catch myself slipping aspects of the hunger/fullness diet into intuitive eating. First of all, I cut myself some slack because I’m human. Then I remind myself of these few points so I am able to return to the IE path:

I brought my desire for structure to intuitive eating and ended up extraordinarily close to making it into a diet which was something I was desperately trying to break free from. I realized that I had started to impose rigid rules on my eating, so I took steps to change my perspective. Intuitive eating did not become a diet for me because I learned to view it as a guideline rather than a set of rules. Diets have rules; intuitive eating does not.

Dieting had become like an old friend that I wanted to keep in my life, but I had to put my physical and mental health first. In order to move forward, we had to part ways. Though there were times I wanted to give up and slip back into my old dieting habits, saying goodbye was the right choice.

Did you ever try to make intuitive eating into the hunger/fullness diet? Please share in the comment section below.

1Safety first though! I’m actually more of a rule breaker than a reckless driver.

2And being forced into anything is not intuitive!

3Read more about this in “What Is This Intuitive Eating You Speak Of?” It was my very first blog post!

4Spoiler alert! It does get easier with time.

5Captain Barbossa knows all about this!