My Friend, Maslow - My Mind My Body
ShareTweet 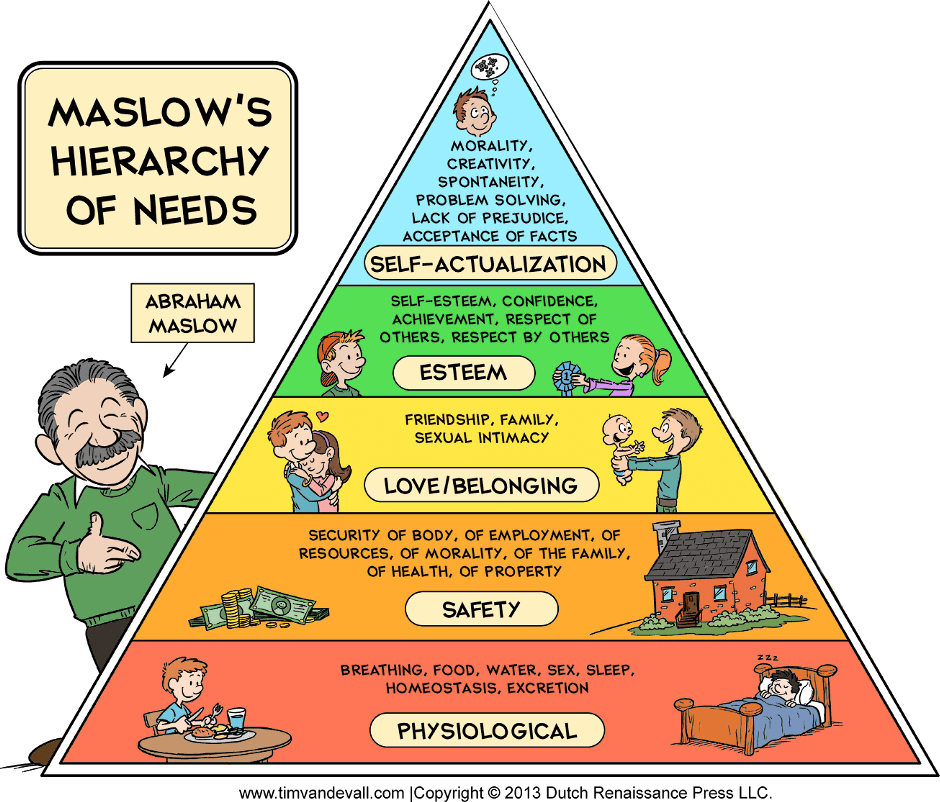 I am going to nerd-out for a bit and show off some of my psychology background. Although I find it fascinating that Sigmund Freud did enough cocaine to kill a small horse and Jean Piaget had an obsession with mollusks,1 I’m going to talk about the comparatively boring, Abraham Maslow.2 Maslow came up with a hierarchy of needs pyramid to show how our more basic needs have to be addressed before our more complex needs. My goal has always been to work on reaching the higher levels of the pyramid so I could move towards my personal potential. The irony is that I thought dieting would help me get to that goal when it really only forced me to chip away at the foundation of my pyramid, making it increasingly unstable.

Prior to being suckered into Weight Watchers, I was teetering between the “love and belonging needs” and the “esteem needs”. I had just gotten married to an amazing man, had a nice group of friends at work, and was feeling pretty good about myself. Well, that is, except for my body.

For almost as long as I can remember, I thought of myself as fat compared to the models in magazines and the actresses on TV.3 I believed that my life would improve considerably if I were thinner. If only I could master and control my body, I would gain respect from my peers because I could do what others couldn’t: lose weight and keep it off. Essentially, I had my eye on reaching “esteem needs” and weight loss would be my golden ticket.

On my quest to reach that higher level of Maslow’s pyramid, I began to ignore the foundation, the basic physiological needs that are required for survival. As directed by Weight Watchers, I cut down my portions and upped my exercise. This was a slow process for me, so my weight dropped gradually. At first I was getting compliments about my weight loss, but then the compliments turned into concern as I got thinner and thinner.

Initially, I believed I was moving towards “esteem needs”. I felt like I had conquered the art of weight loss and this gave my self-esteem quite the boost. While that was happening, my foundation slowly started to crumble. I simultaneously wasn’t feeding myself enough and over-exercising. This was a bad combination. It affected my sleep, I was tired all the time, and I was constantly cold. My body was telling me that something was amiss, but I refused to listen.

It wasn’t until I had been in therapy for several months before I began to realize that I had to perform some self-care and work on my physiological needs if I wanted to get better. I began to eat larger portions and a wider variety of food. Exercise became more moderate rather than military-rigid. Once I made these changes, I began to see such a difference in my body. I had energy, I could concentrate on the task at hand, and my body began to take on a softer shape as I padded my bones with a few additional but necessary pounds.

After my foundation firmed up, I found that I was free to work on the higher parts of the Maslow’s pyramid. My marriage breathed a sigh of relief. My husband went from tiptoeing around my food issues to eating anything in front of me without fear that I would freak out. Social events became less stressful because my focus was on enjoying myself rather than wondering if I was the thinnest person in the room. I learned that I could gain respect from others by being myself, that they appreciated my inner value rather than the size of my pants.

I will always strive for Maslow’s idea of self-actualization. Finding a passion is something I’m working towards. And even if I don’t find something I am truly passionate about, I can still find joy in everyday things.4 I don’t know if I will ever reach my personal potential and be the best person I can be, but now that my foundation is solid, self-actualization is in my reach more than it ever has been.

Are you meeting your basic needs on a regular basis? Please share in the comment section below.

1The former I stole from Robin Williams’ character in Good Will Hunting. The latter I researched all by myself like a big girl!

2Well…he did marry his first cousin.

3And by comparison, I was, but their bodies would be unattainable for the vast majority of the population unless drastic measures were taken (i.e., plastic surgery, eating disorders, etc.).

4 thoughts on “My Friend, Maslow”