Swallowing a Bitter Pill - My Mind My Body
ShareTweet 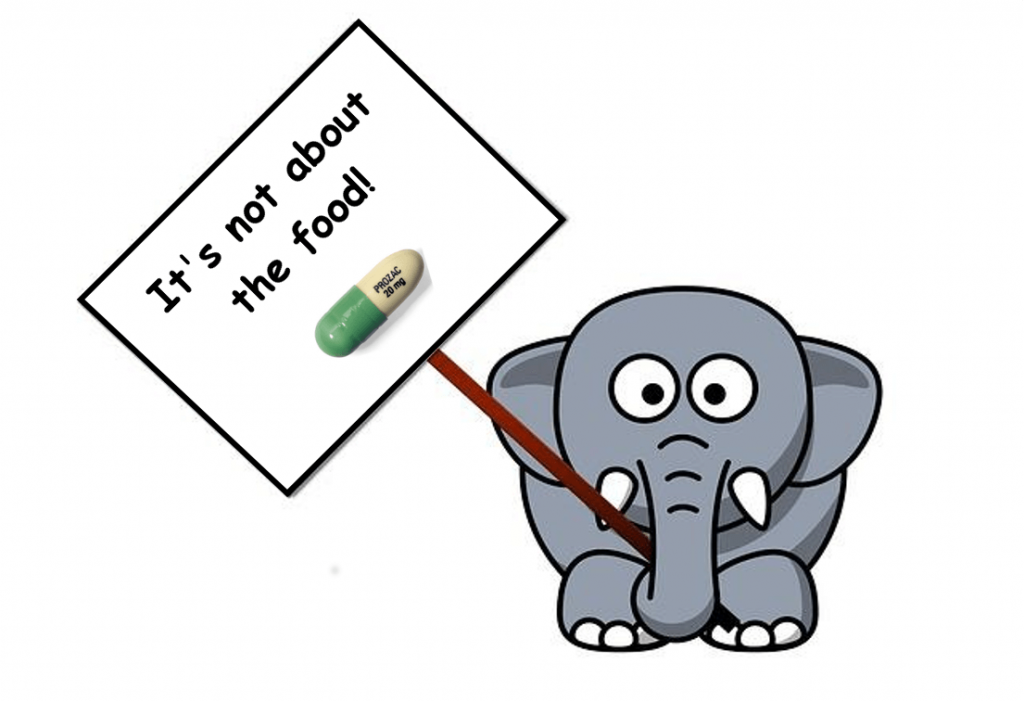 When I had an eating disorder, I was so wrapped up in the details of dieting that I could ignore all of those other pesky feelings that threatened to come to the surface. My mood was low, but dieting consumed my life to the point that it distracted me from that feeling.1 I’m grateful that intuitive eating provided relief in the sense that I no longer fought with food and my body, but I then began to feel the weight of my depression.

My therapist had been gently encouraging me to consider taking mediation for years. I always thought about her words, but I tended to brush off the mere suggestion of depression. I shouldn’t feel down because there is nothing wrong with my life. And I’m not suicidal, so there is no way I’m depressed! During one session, she explained that suicidal thoughts are on a spectrum. On one end there are those people who have a definite plan and are highly likely to carry it out. On the other end are those who wouldn’t care if they were hit by and bus and died. That awakened something in me because the second description perfectly described my attitude towards life. I did not have a plan to kill myself, but I honestly didn’t care if a bus hit me. That is depression. So after years of resistance, I finally gave in and considered the idea of medication.

I brought this up to my husband during one of our nightly walks because I wanted to finally address the elephant in the room. He was very gentle. He shared that he thought my depression went beyond mourning my father’s recent death and that there had always been an undercurrent of sadness.2 After we returned from our walk, he showed me a video that describes depression in people whose lives are put together and how that can look very different from people whose lives are a mess. The description fit me to a T. I was so riveted that I watched it several times and my mind began to open to the idea of medication.3

The video and the talk with my husband brought relief and disappointment in equal measure. I finally could put my finger on what was wrong with me, but I had completely bought into the rhetoric that depression is shameful because those that suffer are weak. I had wanted to “fix” myself on my own, but I just couldn’t do it. I had tried increasing my vitamin D, decreasing my work stress, yoga, meditation, and therapy, but my mood was still low and I felt awful. Although I hate taking medication, I knew it was time to swallow that bitter pill. I figured that I would know if the medication was working in about a month or so, and I could suck it up for a month.

With great reluctance, I made an appointment with a psychiatrist. When we sat down to discuss my issues, I expressed my concern about weight gain and digestive issues because I had worked so hard to overcome those after my eating disorder. He was very kind and, even though I felt like a cliché, he made me feel comfortable with starting Prozac.

On the first day, I took my morning vitamins like usual and paused before popping off the top of the prescription bottle. I placed the Prozac in the palm of my hand and stared at it for a few seconds. In my head, it was like a moment of no return. I tossed it in my mouth, swallowed it down with a gulp of water, and then cried a little bit.4

Each subsequent day got a little bit easier. I patiently waited for the day when I would feel better even though I really didn’t know what that meant. Because depression had been the status quo for so long, I forgot what happy felt like. After about three weeks, I felt lighter, like the blinds on my mind’s window were opening up. I even caught myself laughing at a funny memory of my dog. Being the skeptic that I am, I thought that this was simply the placebo effect, but, in the end, it really didn’t matter. I felt better and I realized that I actually would care if I got hit by a bus.

Although I felt shame when I started Prozac, it faded as it occurred to me that what I had was no different than a physical illness. No one would fault a diabetic for taking insulin, so there was no reason for me to be ashamed of taking an antidepressant. In fact, I began to see that taking medication was not a sign a weakness at all. Asking for help was a sign of strength!

Do you have any experience with depression or a similar condition? If you feel comfortable, please share in the comment section below.

1I wrote about this a bit in “Pushing Down My Feelings With Food”, but I didn’t realize just how deep it went.

2And then this upset me because I felt bad for him having to be around a depressed person all the time. I guess that is what unconditional love is.

3If you want to watch the video, here it is:

4To top it off, the pills contained gelatin which was something I avoided as a vegetarian, but I pushed that aside because I needed to do this for my personal wellbeing.

5I wrote “eating disorder” for the first time in this article. In the past, I always said “disordered eating” because it didn’t sound as serious. I am no longer in denial.